Coup in Brazil is bloodless … so far

When the CIA launched its successful coup against the leftist government of President Salvador Allende in September 1975 it was a savage military operation led by Armed Forces Chief General Augusto Pinochet.
It involved tanks rolling through the street, warplanes screeching overhead, mass arrests, summary executions, closure of TV stations, newspapers and schools and the murder of Allende.
Washington has just executed another Latin American coup and the world has barely noticed.
President Dilma Rousseff has been railroaded out of office in a parliamentary coup. Unlike in Chile 41 years ago, Washington didn’t need tanks nor secretly supplied weapons; the Brazilian coup was organised “peacefully”.
A new pattern of US imperialist intervention is emerging. Silent drone strikes to assassinate opponents is preferable to “boots on the ground” and parliamentary coups are preferable to military ones in executing regime change.
In Brazil, the CIA has spent tens of millions of dollars kickstarting middle-class protest groups, planting propaganda in local, regional and global media and paying massive bribes to legislators, judges, magistrates and journalists.
Ms Rousseff’s “crime”? She is alleged to have cooked the budget books prior to the 2014 election. She shifted money between departmental budgets to make the government’s budget deficit look smaller than it was.
If that is a criminal offence, there isn’t a single Australian federal and state treasurer over the past 50 years who would have escaped impeachment and faced jail!
However, Ms Rousseff’s real “crime” is that she led the leftist Workers Party government. After the global financial crisis (GFC) in 2008, her predecessor President Lula de Silva took the lead in Latin America in blaming Wall Street greed and building support for legitimate taxation of global multi-nationals and banks.
At the same time Brazil was asserting its emerging economic and political strength by standing up to Washington’s military adventures in the Middle East and Palestine. It won the right to host the World Cup in 2014 and the Olympics in 2016.

The election of leftist governments in Chile, Bolivia, Peru, Ecuador, Nicaragua, Venezuela and Uruguay rallied Latin American countries, including Cuba and Venezuela, in a revolt against American hegemony which had been established under the Monroe Doctrine of 1823. The doctrine stated that any efforts by European nations to take control of any independent state in North or South America would be viewed as “the manifestation of an unfriendly disposition toward the United States”.
It the 20th century the doctrine came to mean that US hegemony over North and South American could not be challenged by any nation.
In the wake of US-led atrocities in the Middle East under President George W Bush, independent Latin American countries formed a loose anti- imperialist alliance to defend themselves.
In response, the CIA and US big business launched a concerted attack on Latin American countries: to destabilise their governments, foster reactionary parties and incite anti-government protest. The “psyops” programme was successful, aided by worsening economic conditions and a drastic reduction in foreign credit and investment.
One glaring feature of Ms Rousseff’s overthrow has been the utter disinterest by well-heeled American feminists. Here’s why.
As a young activist Ms Rousseff joined the Marxist-Leninist movements that were fighting against the military dictatorship which seized power in 1964.
In 1970 she was arrested, tortured and jailed for three years. She spent hours strung up and hanging from the ceiling of her cell, she was given electric shock torture and beaten with fists and coshes. She never betrayed her comrades and became known as the “Joan of Arc of subversion”.
In 2010, aged 62, she defeated the right-wing Social Democratic Party candidate to continue Workers Party rule and become the 36th president of the world’s fifth largest country. Her popularity rating soared to 68%, one of the highest of any politician in the world, and she was named the second most powerful woman in the world.
But her undaunted political values are not appreciated in the glitzy world of Manhattan or Hollywood and that’s why they are giving her latest criminal humiliation the cold shoulder.
Now if she was only a bit more like Oxford-educated Aung San Suu Kyi she would receive glowing support from Laura Bush and Hillary Clinton.

But we just voted!

When did plebiscites become the “go to” procedure for making public policy?
I don’t remember it ever being part of the way a liberal democracy works, it is not in the constitutional history books and it is not taught in schools either.
Naturally, the crazies in ungovernable California have citizens’ referenda all the time and look at the state it’s in: one of America’s highest murder rates, drive-by shootings, kidnappings, muggings, violent sex crimes, drugs used by the tonne, gun ownership exploding (if you’ll pardon the expression), and 80% of prisoners from the black American community. It’s almost like Darwin.
But when something really important comes along – like the Australian government committing soldiers, men and women, to war – there is no talk of a plebiscite.
When prime minister John Howard committed troops to the US-led invasion and occupation of Iraq he didn’t even inform parliament (it might have led to a debate). He made the announcement on television.
And another thing, if Howard is so proud of what he did and that he would do the same thing all over again, why doesn’t he fly to Baghdad and explain to the locals how he selflessly brought them freedom and democracy?

This is an edited extract from the weekly column written by multi-award-winning journalist Gideon Levy in Israel’s oldest newspaper Haaretz:
“Two days ago, Benjamin Netanyahu hosted members of the Haaretz editorial staff for a closed conversation that lasted four hours, during which he spoke without interruption. ‘Spoke’ is a rather restrained understatement; Netanyahu lectured, preached, demanded and overwhelmed; he showed videos, slide presentations, maps, tables, and minutes.
“He scribbled a self-portrait, with an elongated nose and beads of sweat; he pounded on the table, raised his voice, lowered it, leaned forward and back in the meeting room, wrote on the board and erased. At one stage, he approached my colleague Odeh Bisharat so angrily that I feared for his safety. At another point someone saw tears in his eyes.
“In the Prime Minister’s Office in Jerusalem there sits a man who believes solely in the power of his country. Weakness devastates him. Morals, values and justice are not within his realm of thought.
“He doesn’t believe in any peace with the Palestinians; he will defeat them with the alliances he is weaving with his new friends, the ephemeral heads of corrupt regimes in the Arab world, until they agree to the non-arrangement he proposes, which of course will never happen. The fate of the Palestinians doesn’t interest him in the least.”
If I had written this it would be interesting but hardly new to readers of my Weekly Notebook. It’s more convincing because one of Israel’s finest journalists is the author.

As the old saying goes, “You can’t teach an old dog new tricks,” and that mangy old cattle dog is still at it.
When Roger Ailes resigned (read: was sacked) as head of Fox News in America in July, Murdoch appointed not one but TWO executives to replace him. Jack Abernethy and Bill Shine will be co-presidents of the network – reporting directly to Murdoch.
If Murdoch’s past form is anything to go by, he will watch Abernethy and Shine tear each other apart and the survivor will be his next CEO. It’s the News Corp equivalent of cock fighting, cage boxing or bear wrestling. Divide and destroy – pure Murdoch.

Before you hear our main speaker I want to tell a little about One Nation and what we believe in. Now to some of you, this is probably the first time you’ve heard the truth about our party because the so-called media tells lies about us all the time. Why? Because we belong to an international organisation that is dedicated to unmasking the people who are controlling all our lives. You may not know them, but they know you. We call them the Optimus Primus, a group of billionaires who are in fact members of a world government – the Rothschilds, the Koch brothers, the Rockefellers, the Aga Khan, Prince Philip and Baz Luhrmann. They are using global warming as a scam to impose their new world order which will be global fascist dictatorship and the world will be run by the CSIRO, NASA, the UN and Baz Luhrmann. But it doesn’t end there. They are already financing space exploration to find other planets which they will colonise to continue to make vast profits. They are also developing cryogenics technology to freeze themselves in time and then to thaw out in the future to continue ruling the galaxy. It is a truly frightening prospect but by joining One Nation tonight we can stop it. Just think – we’ll abolish taxation, start remaking Holdens, turn the coastal rivers inland and turn the Red Centre into the Great Aussie Food Bowl, chuck the Asians out and replace them with nice English people from Basingstoke and Cheltenham. Now are there any questions?”
Bloke at the back of the room: “Who’s Baz Luhrmann?”
Next week: Nick Xenophon Party

Call me a cricket tragic if you want to but I just love the game and our current captain Steve Smith, what a player, he just scores century after century and with such ease and such grace, I am his biggest fan. You can have your Pontings and Waughs but for me Steve is the man. Having said that I was a little disappointed with our performance in Sri Lanka when we lost every Test to the darkies with unpronounceable names. And now, in the middle of the one-dayers, Smithy has left the team like a shag on a rock and flown back home. Why? They say he’s tired. Oh really? So am I but I go to work each day and so do millions of other people. Can you imagine Bradman, Richie Benaud or AB pulling out of a Test series? I don’t think so. Smith is a wimp and he doesn’t deserve to be captain any longer. They should bring back that David Boon. Boonie, what a great player, he once drank 52 cans on a flight from Sydney to London. 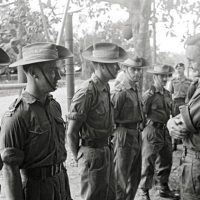 Netanyahu is a liar – so what’s new?

Riveting book on Australia and China

Come the Revolution relies on the support of readers. Please click on the "Donate" button below to make a contribution.

Click Here to submit an article on our site.

The Book that started the conversation